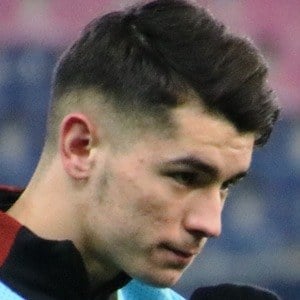 Attacking midfielder who joined Manchester City and Spain U19  in 2016. He made his debut with Manchester City in the 80th minute to replace Kelechi Iheanacho in the EFL Cup. He was signed on for three years, five days later. He began playing for Real Madrid in 2019.

He found acclaim with Spain U17 in the 2016 UEFA European Under-17 Championship in Azerbaijan. He has 2.7 million followers on his brahim Instagram account.

His father tried to get him playing for Barcelona when he was young, but Malaga held onto him.

He and Jack Harper are soccer players from Malaga, Spain.

Brahim Díaz Is A Member Of