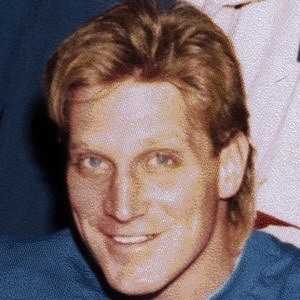 Legendary NHL right winger who was inducted into the Hall of Fame in 2009 after a 19-year playing career. He became a member of the exclusive 700-goal club and won Stanley Cup Championships with the Dallas Stars in 1999 and Detroit Red Wings in 2002.

He started his professional career with the World Hockey Association in 1978.

He had one of his best seasons in 1991 with the St. Louis Blues, when he scored a remarkable 86 goals in 78 games and won the Hart Memorial Trophy, given to the NHL's MVP.

He raised three children, Jayde, Jude, and Crosby, with his former wife, Darcie.

He retired as the third-highest goal scorer in NHL history behind fellow Canadian Wayne Gretzky.

Brett Hull Is A Member Of