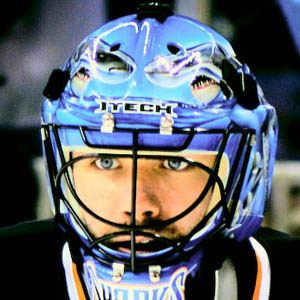 Former NHL goalie most famous for his days with teams like the Phoenix Coyotes and Philadelphia Flyers. He made the NHL All-Rookie Team for the 1999-00 season.

He was born in Woonsocket, Rhode Island and was originally drafted in the first round of the 1995 NHL Entry Draft by the Flyers.

He set an NHL record for the longest shutout streak by going five hours, thirty-two minutes and one second of game time without allowing a goal during his time in Phoenix.

He has children named Tyler and Brianna.

He was traded from Philadelphia to Phoenix in exchange for Robert Esche in 2002.

Brian Boucher Is A Member Of