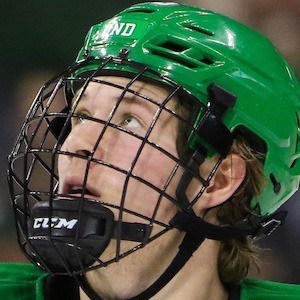 Right winger who was taken as the 23rd overall pick by the Vancouver Canucks in the 2015 NHL Entry Draft. He has gained renown for his prolific career playing for the University of North Dakota.

He began his junior hockey playing career in 2013-14 as a member of the Sioux City Musketeers. He joined the University of North Dakota for the 2015-16 season.

He led NCAA Division I in goals and points with 27 goals and 60 points during the 2015-16 season. He played for Team USA at the IIHF U-20 Championships, where he led the team to a bronze medal.

He was born and raised in Burnsville, Minnesota.

He was taken two picks after Colin White's selection in the 2015 NHL Entry Draft.

Brock Boeser Is A Member Of