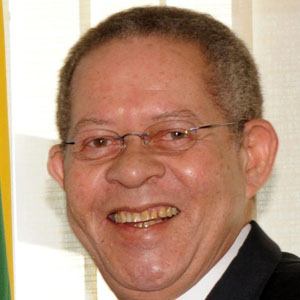 Jamaica Labour Party politician and Jamaica's eighth Prime Minister. Prior to becoming Prime Minister, he served as a Member of Parliament for the Kingston West constituency.

After briefly attending St. George’s College and Jamaica College, he graduated from the University of the West Indies with a Bachelor of Science degree in economics.

Following what many believed to be his mishandling of a United States extradition order regarding a Jamaican drug trafficker named Christopher "Dudus" Coke, Golding resigned as Prime Minister in 2011.

He and his wife, Lorna Golding, raised two daughters (Sherene and Ann-Merita) and one son (Steven).

In a controversial 2008 interview with BBC journalist Stephen Sackur, Golding announced his intention to bar homosexual politicians from serving in the Jamaican government.

Bruce Golding Is A Member Of