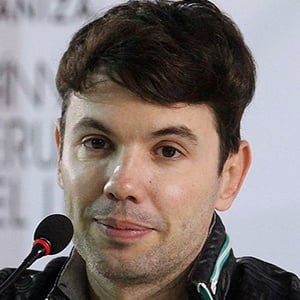 Television personality best known as the host of the award-winning Peruvian movie news and interview show Cinescape, which he began hosting in 2000. In 2010, he started presenting the technology news show TEC on América TV.

He entered the entertainment industry through his production work on the game show Triki Trak in the 80s.

He is a voice actor who has lent his talents to Spanish-language dubs of animated films like Kung Fu Panda and Coraline.

He is the son of television presenter Luis Ángel Pinasco and singer Bárbara Pérez. His sister Chiara has served as the co-host of TEC.

He has interviewed celebrities like Pierce Brosnan has the host of Cinescape.

Bruno Pinasco Is A Member Of