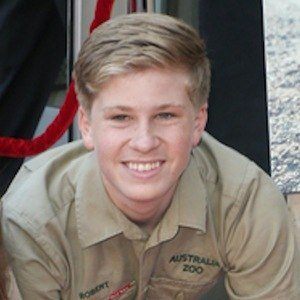 Son of the late Steve Irwin and Terri Irwin who earned a Logie Award in 2013 for his role in his father's series Steve Irwin's Wildlife Warriors.

When he was 4 weeks old, his father held him up beside a saltwater crocodile, sparking a good deal of controversy.

He and his family also had their own reality show called Crikey! It's the Irwins.

He was born in Buderim, Queensland, Australia. His father Steve Irwin was known as the Crocodile Hunter. His older sister is Bindi Irwin.

His mother Terri Irwin became known for her activism, becoming an honorary member in the Order of Australia.

Robert Irwin Is A Member Of