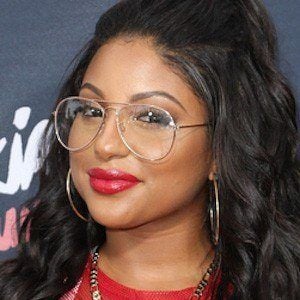 Pop singer best known as a member of girl group Girls United, which performed on The X Factor (US) in 2013. She is also a solo artist. Her debut single "Singles Out" was released on iTunes in 2015.

She was a dancer from an early age. She attended performing arts schools and studied ballet, hip hop, jazz, and modern. Her first foray into the music industry was as a backup dancer when she was 17 years old.

She set off on her solo career in earnest when Girls United all but dissolved after former Girlicious and The Pussycat Dolls member Nichole Cordova left in 2014.

She is of Haitian descent. She began dating dancer Anthony Marquis in 2016. She later began a relationship with NFL player Omar Bolden. Together, they post content on their shared The Comar Show YouTube channel.

She has danced on world tours, in videos, on television, and more for acts like Nicki Minaj, Britney Spears, Pharrell, and Pitbull.

Candice Craig Is A Member Of

Honey: Rise Up and Dance
The Perfect Match
The Comar Show
33 Year Olds