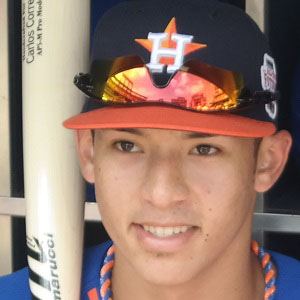 Shortstop who won a World Series title with the Houston Astros in 2017. He was selected first overall in the 2012 MLB Draft and debuted with the Astros in June 2015. He was named 2015 American League Rookie of the Year after batting .279 with 22 home runs.

He attended the Puerto Rico Baseball Academy and High School on a scholarship, then had his breakout performance at the 2011 PG World and National Showcases.

He is the third Latin American player to be selected first overall in the MLB Draft, after Alex Rodriguez and Adrian Gonzalez.

He was born in Santa Isabel, Puerto Rico to Sandybel Oppenheimer and Carlos Correa, Sr. He proposed to his fiancée Daniella Rodriguez shortly after the Astros claimed their 2017 title, while the team was still celebrating on the field. Correa and Rodriguez were married in a courthouse ceremony on November 11, 2019. On November 29, 2021, the couple welcomed a son named Kylo Daniel Correa.

He and outfielder George Springer became teammates on the Astros in 2015.

Carlos Correa Is A Member Of