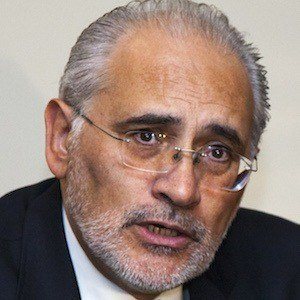 Known for his tenure as the 78th President of Bolivia from October 2003 through June 2005. Prior to this, he served as the country's Vice President from 2002 through 2003 under his presidential predecessor Gonzalo Sanchez de Lozada.

He graduated from Complutense University of Madrid and Universidad Mayor de San Andrés. He had worked as a journalist and TV personality prior to his political career taking off.

He claimed no party affiliation during his tenures as both vice president and president of Bolivia. He has also served as a Bolivian spokesman in the Obligation to Negotiate Access to the Pacific Ocean case held before the International Court of Justice.

He was born and raised in La Paz, Bolivia.

He preceded Evo Morales, who was Bolivia's 80th president, as the country's chief leader.

Carlos Mesa Is A Member Of