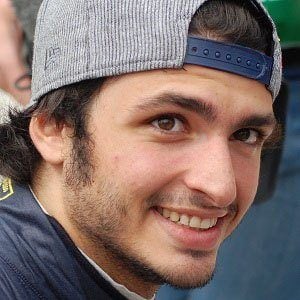 In 2011, representing the Koiranen Motorsport team, this Spanish Formula One driver placed first at the Formula Renault 2.0 Northern European Cup. Three years later, racing for France's Driot Associes Motor Sport (DAMS) team, he became the champion of the Formula Renault 3.5 Series. In 2019, he signed with McLaren and in 2020, he signed with Ferrari for the 2021 season.

Before becoming a race car driver, he won several karting championships, including the 2009 Junior Monaco Kart Cup and the 2008 Asia-Pacific KF3 event.

Racing for the EuroInternational team, he placed fourth in the 2010 Formula BMW Europe. He earned his first podium in Formula 1 at the Brazilian Grand Prix in 2019, placing third.

A native of Madrid, Spain, he is the son of two-time champion World Rally driver Carlos Sainz. He has been dating journalist, Isabel Hernaez.

In 2021, he joined the Scuderia Ferrari racing team as the racing partner of Charles Leclerc.

Carlos Sainz Jr. Is A Member Of