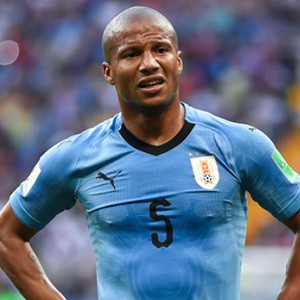 Attacking midfielder who has gained fame for his international club career, including for Santos of Brazil's Serie A. He previously helped lead Monterrey to victory at the 2017 Copa MX Apertura tournament where he was also the top scorer.

He played his youth soccer for Liverpool Montevideo. He debuted professionally with the club in 2003.

He competed for Uruguay at the 2018 FIFA World Cup in Russia. He was named South American Footballer of the Year in 2015 after finishing as the runner-up in 2014.

He and Diego Godin have played as teammates for Uruguay's national team.

Carlos Andrés Sánchez Is A Member Of