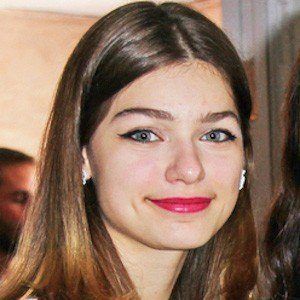 Actress and social media sensation best known as the younger sister of Percy Jackson star Alexandra Daddario and Shadowhunters actor Matthew Daddario. She has earned over 130,000 followers on Instagram.

After joining Twitter in 2010, she opened it in 2011 by tweeting her sister the message "@AADaddario I'll be your new stalker. Apparently on twitter they're called "followers" Love the bunny pics-love that painting! :D".

She played the character Frieda in the 2020 independent horror film The Retreat.

Like her siblings, she was born to Richard and Christina Daddario. Her grandfather on her father's side, Emilio Q. Daddario was a democratic politician from Connecticut.

She has posted photos to Instagram with Geek Charming actress Sarah Hyland while visited the Shadowhunters set.

Catharine Daddario Is A Member Of