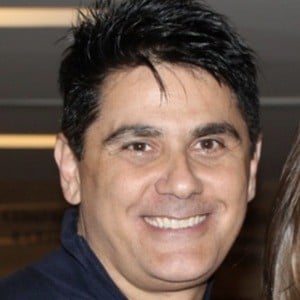 Journalist, actor, and radio and TV host who has been the presenter of Today,  a morning news and entertainment show on RecordTV, since 2015.

At age 16, he auditioned for Jovem Pan Radio, and was approved to be a sports journalist.

From 1986 - 1998, he took a break from journalism and turned to acting, most notably playing Afonso Carvalho in the telenovela Kananga do Japão.

He married actress Elaine Mickely in 2000. Together they have two children, Luigi Lorenzo and Luma Mickely Lima. His parents are Luiz Gonzaga Cesar, a radio presenter, and Therezinha Sebbe. He has two brothers, Reinaldo Cesar and Saulo de Tarso Cesar.

Ana Hickmann is one of his co-hosts on Today.

César Filho Is A Member Of