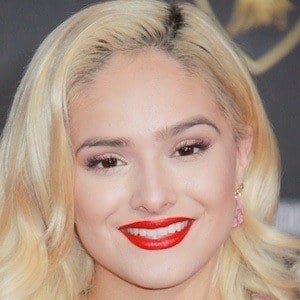 Member of the dance crew I.aM.mE and the winner of the reality show America's Best Dance Crew in 2011.

She trained as a ballet dancer for three years before taking up hip-hop dancing.

She won the Teen Choreographer of the Year award at the World of Dance Industry Awards in 2012.

Her parents named her Olivia Irene Gonzales. She is the youngest of five siblings, including popular Instagrammer Dominique Gonzales. She dated web star Josh Leyva for three years. She then began dating actor Jukka Hilden in 2018. She and Hilden married in September 2019 and welcomed a daughter two months later. Their second daughter, Amélie Irene Hildén, was born in July 2021.

She was a backup dancer in a tribute to Britney Spears at the 2011 MTV Video Music Awards.

Chachi Gonzales Is A Member Of