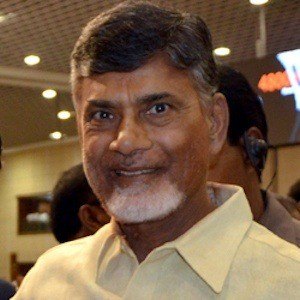 Indian politician known for serving as chief minister of Andhra Pradesh from 1995 to 2004 before again taking office in 2014. He was credited for helping turn Hyderabad into an IT power during his first term as chief minister. He's also served as head of the Telugu Desam Party.

He studied economics at S.V. College of Arts and pursued a Ph.D, but dedicated himself to politics prior to completing the degree. He started getting involved with politics while he was still in high school.

In 1995, he was involved in a coup against his father-in-law N.T. Rama Rao, ousting him and taking over as Chief Minister. Two of Rao's sons and another son-in-law were involved in the coup.

He married Rao's daughter Bhuvaneswari, with whom he has a son named Lokesh.

He met both Bill Clinton and Tony Blair during his first run as chief minister.

Chandrababu Naidu Is A Member Of