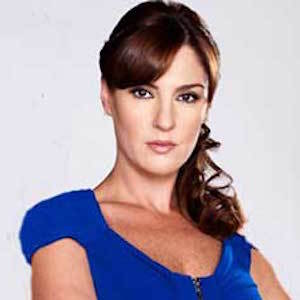 Telenovela star and singer who first rose to fame as Rebeca Zenteno in Sweet Challenge. She went on to earn roles in shows like Antes muerta que Lichita, La mujer del Vendaval, and Rafaela. She is best known for her portrayal of villainous or otherwise scorned women.

As a child she studied ballet, singing, and acting. By 1983, she had earned her first professional acting role in Polo, Pelota Amarilla.

During the 1990s, she gained the most success as a singer, releasing four albums before focusing her energies on her telenovela career.

She was born to actress Jacqueline Andere and writer Jose Maria Fernandez Unsain. She married Enrique Lake in 2008 and later gave birth to a daughter, Natalia, and a son, Sebastian. She was also previously married to Roberto Gomez Fernandez from 2001 to 2006.

She starred alongside Scarlet Ortiz and Jorge Poza in the 2011 telenovela Rafaela.

Chantal Andere Is A Member Of