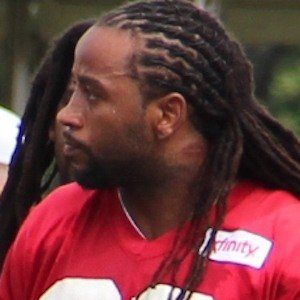 NFL safety and cornerback who became a solid contributor for the Carolina Panthers, recording 343 tackles and 11 interceptions in his first 6 seasons. He was a 16-game starter his rookie 2008 season.

He earned a scholarship for the University of Iowa after an impressive career at Robert E. Lee High School in Baytown, Texas.

He was drafted 67th overall by the Panthers, after being a Second-team All-Big Ten selection his last season playing defensive back at the University of Iowa.

He intercepted a pass against his division rival Drew Brees on December 31, 2012.

Charles Godfrey Is A Member Of