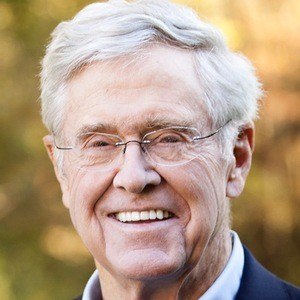 Co-owner, chairman of the board, and chief executive officer of Koch Industries, which is involved in oil refining and chemical as well as a variety of well-known brands. He was one of Time Magazine's 2011 most influential people for his work, and has received three honorary doctorates along with myriad other awards.

He received a Bachelor of Science in general engineering in 1957 from the Massachusetts Institute of Technology before becoming president of his father's business ten years later.

After he came to power his company began producing Lycra fiber, Quilted Northern tissue and Dixie Cup, among other well known products.

He disagrees with the business ideology of Warren Buffett.

Charles Koch Is A Member Of