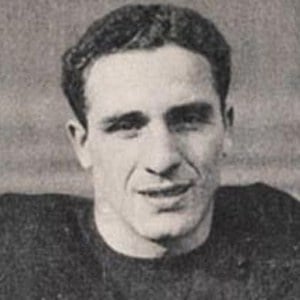 Hall of Fame halfback, and quarterback who played in the Chicago Cardinals' Dream Backfield in the 1940s and '50s.

His college football career at the University of Georgia was interrupted by service in World War II.

He was part of a bidding war between the AAFC's Giants and the NFL's Cardinals, who both wanted him. He ended up signing with the Cardinals to a four-year, $100,000 contract in 1947.

He fathered three children with his first wife Virginia, who died in 1971.

He was a member of the National Football League's 1940s All-Decade Team, which also included Bill Dudley.

Charley Trippi Is A Member Of