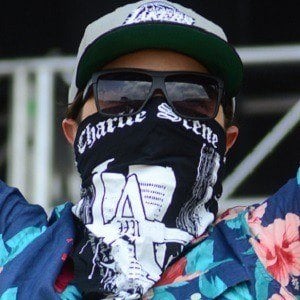 Rap-rock artist and songwriter known for being a member of the group Hollywood Undead. He has been joined by a number of other performers in the band including Johnny 3 Tears, J-Dog, Da Kurlzz and Deuce.

He was born in Los Angeles and began performing with Hollywood Undead in 2005.

All of the members of Hollywood Undead wore signature masks. He made his first one out of a Del Taco bag and later got a custom bandana with his name printed on it.

He married his girlfriend Randi Pentzer. His real name is Jordon Terrell.

He appeared at the Family Values festival, which also featured Jonathan Davis and his band Korn.

Charlie Scene Is A Member Of