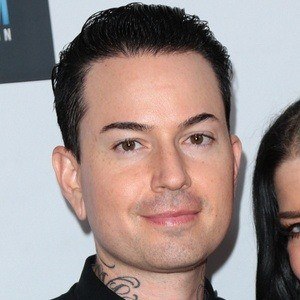 Musician for the Los Angeles-based rap-rock band Hollywood Undead, known for albums like 2008's "Swan Songs." He is an accomplished multi-instrumentalist, contributing guitars, bass, synthesizers and keyboards to the band.

He and Deuce posted the first Hollywood Undead single, "The Kids," to MySpace in 2005.

He has knuckle tattoos that read "Die Now."

His real name is Jorel Decker. He has a sister who is a DJ. His brother committed suicide. He married Vanessa James in November 2016.

J-Dog Is A Member Of