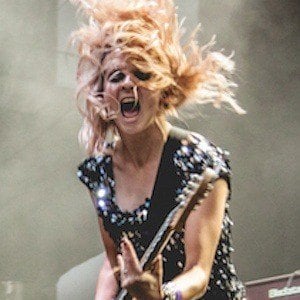 Bassist for the English rock band The Subways. On July 4th, 2005, the group released their debut album, Young for Eternity. It peaked at #32 on the UK music charts.

The band formed in the basement of one of her bandmate's house. They began playing popular song covers under the collective name Mustardseed.

In 2008, they released their sophomore album, All or Nothing. It peaked at #17 on the UK music charts.

She grew up in Hertfordshire, England, where The Subways was formed.

She began, along with her two bandmates, singing covers of Kurt Cobain and Nirvana's music.

Charlotte Cooper Is A Member Of