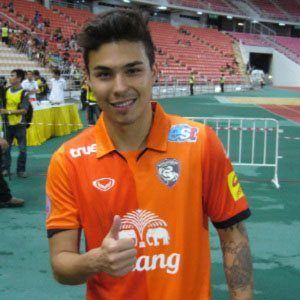 Thai-Swiss soccer player who won the 2009 FIFA Under-17 World Cup representing Switzerland. He has since become a standout player with clubs like Suphanburi in Thai Premier League.

He played for FC Kloten and YF Juventus as a child.

He twisted his knee while celebrating a goal in the 2013 AFC Champions League and was unable to play for three months.

His mother is Thai and his father is Swiss. He has been in a long-term relationship with Melanie Manuel.

He was coached by Thai former soccer star Kiatisuk Senamuang at the 2013 Southeast Asian Games.

Charyl Chappuis Is A Member Of