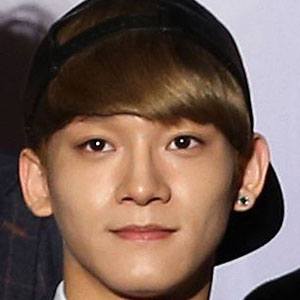 South Korean pop singer best known as the main vocalist of the EXO subgroup Exo-CBX as well as the SM Entertainment group SM the Ballad.

He was scouted by SM Entertainment to audition for EXO at age 18 and was introduced as a member of the band in a televised performance in December 2011. In 2014, he joined SM the Ballad.

He has appeared on popular EXO-related television shows like EXO Showtime and XOXO EXO.

He was born Kim Jong-dae. His older brother's name is Kim Jong-deok. He and his wife welcomed a daughter together in April 2020. Their second child was born in January 2022.

He and Xiumin have both been members of the pop band Exo-CBX.

Chen Is A Member Of