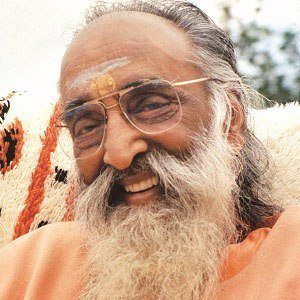 Famous as the founder of the Chinmaya Mission, an organization created to incite global interest in an ancient Hindu scripture-based philosophy known as Advaita Vedanta, Saraswati published nearly 100 books and articles on the topic of ancient Hindu texts.

After earning his bachelor's degree from St. Thomas College, Trichur, and his graduate degrees in law and literature from Lucknow University, he pursued a career in journalism and was also involved in the Indian Independence Movement.

It was not until the late 1940s that he abandoned his previously skeptical stance and embraced both the Hindu faith and a life as a spiritual leader.

Born Balakrishna Menon, he grew up in Kerala, India, as the son of Paru Kutty and judge Kutta Menon.

A century apart, he and fellow Hindu religious leader Swami Vivekananda both delivered key note speeches at a religious conference known as the Parliament of the World's Religions.

Chinmayananda Saraswati Is A Member Of