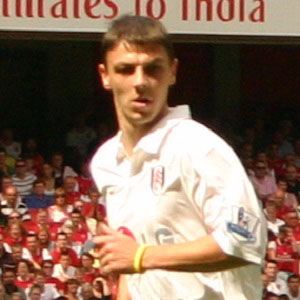 In 2015, this soccer midfielder and defender began playing for the Derby County F.C. Earlier in his career, he was a member of the Fulham, Reading, Burnley, and West Bromwich Albion clubs, and he also played for the Northern Ireland U18, U21, and senior national teams.

He played his youth career for both Ballymena United and the Southampton F.C. and made his senior debut for the latter team in 2003.

He was a finalist for the FA Cup with Southampton, the UEFA Europa League with Fulham, and the Football League Championship with Burnley.

He spent his youth in Ballymoney, Northern Ireland. Sadly, in 2010, his mother's house in County Antrim was the object of a politically-motivated bombing.

During the 2009 to 2010 season with the Fulham F.C., Baird often stepped in for his injured teammate Danny Murphy.

Chris Baird Is A Member Of