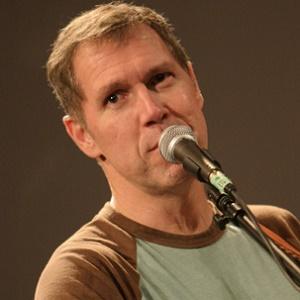 Recording artist with 11 album releases between 1997 and 2015 who transitioned from Christian music in 2005 to pop music with his #8 AC/Radio love song “When Did You Fall (In Love With Me)” and top 20 song “Lemonade.” He was the 1999 Dove Award Winner for Male Vocalist, garnering 11 #1 hits on Christian radio.

He traveled with his guitar during most of his early adulthood playing at youth and college events across the U.S., remaining independent of any record deal until his mid-30’s.

He spends most of his time rock climbing and selling paintings, in addition to his music career.

He was raised in the Maryland suburbs of Washington D.C. with three brothers. The boys filled their teen years with basketball and soccer teams, and Old Rag Mountain hiking and camping trips.

He wrote and released the worldwide standard Christmas song “Welcome To Our World.” The song would later be recorded by Amy Grant, , , , and many others.

Chris Rice Is A Member Of