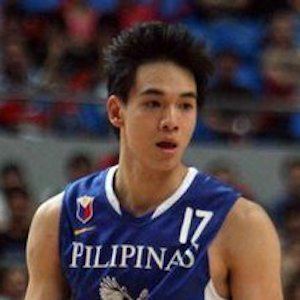 Filipino professional basketball player. He is known for playing with the Rain or Shine Elasto Painters team of the Philippine Basketball Association. He is also an actor who is known for hosting the TV series IBILIB: Wonders of Horus which airs every Sunday morning on GMA Network.

He attended the Ateneo de Manila University in Quezon City, Philippines, where he earned a Bachelor of Science degree in management engineering and a minor in Chinese studies. He first began playing basketball professionally in 2012.

In 2008, he was the winner of a Nickelodeon Philippines Kids' Choice Award for Favorite Athlete.

He was born and raised in San Juan, Philippines. He has two brothers and two sisters.

As a basketball player from the Philippines, he can be seen in relation to other professionals from the area including Asi Taulava and Benjie Paras.

Chris Tiu Is A Member Of