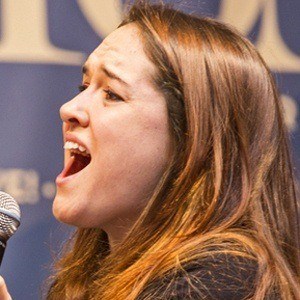 Broadway musical theatre star best known for joining the cast of Wicked in 2014 as Elphaba. She also appeared in the show's 2nd National Tour and toured with RENT as Maureen.

She fell in love with musical theatre at the age of five when she saw a production of Cinderella. She would eventually earn a BFA in musical theatre.

In 2016, she joined the cast of the US National Tour of Finding Neverland as Sylvia.

She was raised in Lynnfield, Massachusetts by Tom and Ann Dwyer. She has an older sister named Katie.

Both she and Ben Krieger starred in national tours of Finding Neverland.

Christine Dwyer Is A Member Of