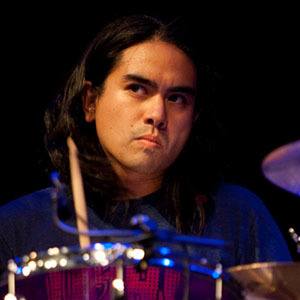 Drummer who is known for his work as a touring and recording band member of the group Silversun Pickups. He is a left-handed drummer and has earned representation and sponsorship from Istanbul Cymbals and C&C.

He is a self-taught drummer who received his first kit as a birthday present. He first started playing with Silversun Pickups in July of 2002.

He has been featured in several articles on Modern Drummer's website including in 2015 where he discussed his recording process and in 2017 when he was interviewed about touring.

He received his first drum kit as a gift from his dad.

He performed on the David Letterman show where David talked to him about his unusually high crash cymbal.

Christopher Guanlao Is A Member Of