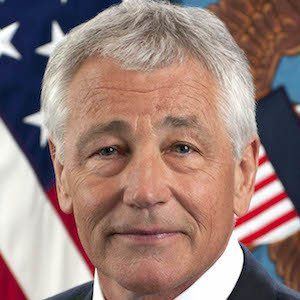 Vietnam War veteran who was a US Senator from Nebraska from 1997 to 2009. He was appointed the 24th United States Secretary of Defense in 2013.

He received two Purple Hearts while an infantry squad leader in the Vietnam War and founded Vanguard Cellular, which was acquired in 1999 by AT&T Wireless.

Senate Republicans denied Democrats the 60 votes needed to end the debate on his nomination, becoming the first time in American history that a nominee for Secretary of Defense was filibustered.

He married Lilibet Ziller in 1985 and has two children.

He was appointed the US Secretary of Defense by President Barack Obama.

Chuck Hagel Is A Member Of