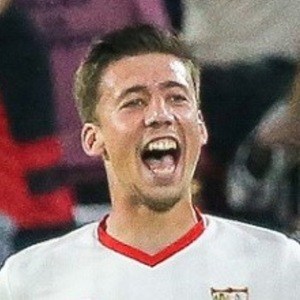 French professional footballer who is known for his work as a centre-back and defender for the Spanish club Barcelona. He is also known for his playing on a variety of French national teams including in the under 21, 20, and 19 squads.

His youth career started in 2001 when he began training with the AMS Montchevreuil club. He began playing for Nancy FC in 2010 and in 2012 he made his debut with their B squad. He moved up to their first team the following season and joined Sevilla in 2017. His debut with Barcelona came in 2018.

He scored his first goal in European competition in November of 2018 in a match against FC Spartak Moscow in the UEFA Champions League.

He was born and raised in Beauvais, Oise, France.

Other professional players who also played for France's Under 21 team include Christian Bassila and Younes Kaboul.

Clément Lenglet Is A Member Of