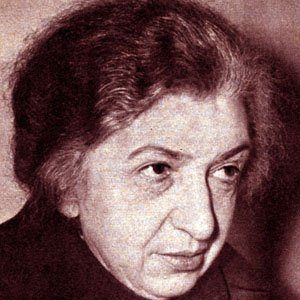 Classical musician known for her chamber music and mastery of early Romantic-era composers. Her career was hindered by many physical maladies.

She studied at the Paris Conservatoire with Alfred Cortot, Lazare Levy, and Mme Giraud-Letarse. She was graduated with a Premier Pix in both piano and violin at the age of 15.

She not only battled scoliosis, but also stage fright and struggled through a prolonged period of poverty. She was finally noticed in 1949 after a Netherlands concert tour won her great acclaim.

She was born in Bucharest to a Sephardic Jewish family.

She was close friends with comedian Charlie Chaplin who called her one of three geniuses he had been privileged to meet.

Clara Haskil Is A Member Of