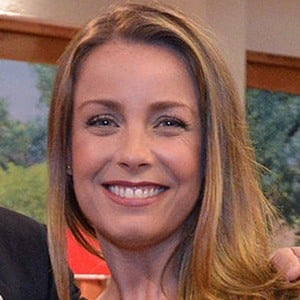 Chilean television actress and model who is known for hosting Buenos dias a todos. She is also known for having starred as Carrie Castro in Fuera de Control.

She first started her career as an actress in 1990 but gained attention in 1995 when she starred in El amor esta de moda.

While working on Extra-Jovenes for Chilevision, she met her husband Juan Carlos Valdivia Lena.

She and her husband Juan Carlos Valdivia Lena have two children.

She spoke with fellow actress Natalia Valdebenito on Canal TV in October of 2019.

Claudia Conserva Is A Member Of