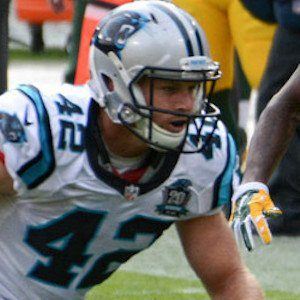 Professional football safety who is best known for his time with the NFL's Carolina Panthers. In 2015, he was a member of the Panthers team that won the NFC Championship, and appeared in Super Bowl 50.

He played college football for the Texas Christian University Horned Frogs' team. He declared for the 2011 NFL Draft following his graduation.

He has regularly contributed to the Panthers' special teams and defensive units. In June 2014, he signed a 2 year contract extension to continue playing for the Panthers.

He was born and raised in Bridgeport, Texas.

He earned his first career interception during the Panthers' 2015 Week 7 win over Sam Bradford and the Philadelphia Eagles.

Colin Jones Is A Member Of