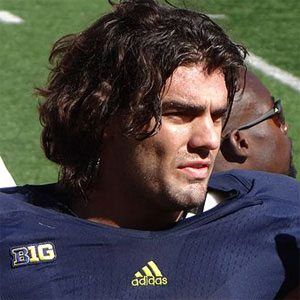 Hybrid defensive end/linebacker went undrafted in 2013, then earned a spot with the Carolina Panthers.

He was named the Gatorade Player of the Year in Arizona and one the Curley Cup Award, an honor for defensive lineman, his senior season at Chaparral High School.

He was a two-time All-Big Ten Conference honorable mention in addition to winning Michigan's Richard Katcher Award for the team's best defensive lineman.

He is the son of Fred Roh, who played college level basketball for Grand Valley State University.

He was teammates with Denard Robinson during the quarterback's 2010 All-American season with the Michigan Wolverines.

Craig Roh Is A Member Of