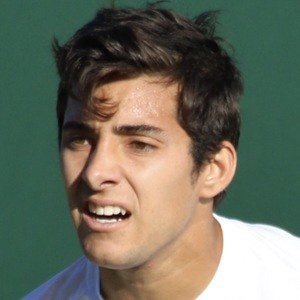 Tennis player who defeated Alexander Zverev Jr. to become the winner of the 2013 Junior French Open. At 16 years and 8 months old, he became the youngest Chilean player ever to win a high-level ATP match.

At the 2019 Davis Cup, he gave Chile its first win outside the Americas in over 50 years.

His parents are Sergio Garín and Anna Claudia Medone.

He was doubles partners with Nicolás Jarry at the 2013 Junior French Open.

Cristian Garín Is A Member Of