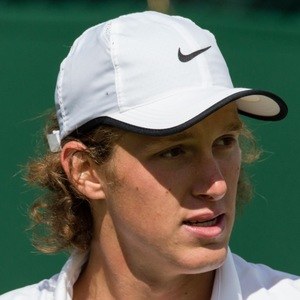 Professional tennis player from Chile who is known for having won multiple singles tournaments on the ATP Challenger Tour. He is right handed and known for his two-handed backhand and has played in the US Open, French Open, and at Wimbledon.

He first began earning recognition for his playing in 2013 when he reached the final of the French Open. In February of 2015, he played his first match in an ATP tournament. He reached his first ATP Final at the 2018 Brasil Open.

He won his first match in a Grand Slam at the 2018 Wimbledon where he defeated Filip Krajinovic in 4 sets.

He is the grandson of legendary tennis player Jaime Fillol.

He played against Joao Sousa at a match in Medellin, Colombia in July of 2017 which he won.

Nicolás Jarry Is A Member Of