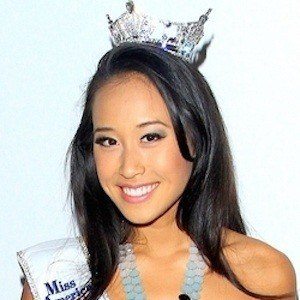 A long-time beauty contestant, she was the first runner-up in the Miss America pageant in 2014. She and Miss America 2014, Nina Davuluri, are both Asian-American.

She attended Ruth Asawa San Francisco School of the Arts and later Stanford University for her bachelor's and master's degrees. In 2008, she was Miss California's Outstanding Teen. She was Miss Chinatown USA in 2010 and Miss California in 2013 before competing at Miss America.

After completing her term as Miss California in 2013 she joined Google as part of their Market Development Team.

Her father is of Chinese descent and her mother is Taiwanese.

Co-host of the Miss America pageant 2014, Lara Spencer, asked her and Nina how they were feeling to both be standing there, as two Asian-American finalists. The two had nothing but pride for the historic moment.

Crystal Lee Is A Member Of