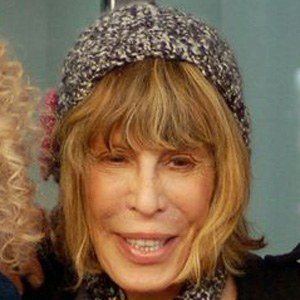 Best known for writing such songs as You've Lost That Lovin' Feelin' and Walking in the Rain with her husband Barry Mann.

She was a trained actress and dancer and worked in the Brill Building during the 1960s.

She and her husband were inducted into the Songwriters Hall of Fame in 1987.

She married Mann in 1961. The couple had one daughter together, popular psychotherapist Dr. Jenn Berman.

She and Mann worked with Phil Spector on the song You've Lost That Lovin' Feeling, which became the most-played song of the 20th century.

Cynthia Weil Is A Member Of