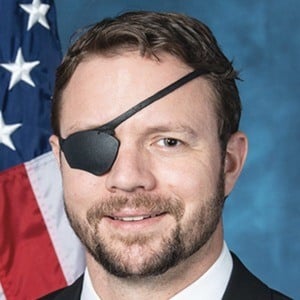 Republican Party politician and member of the U.S. House of Representatives who succeeded Ted Poe in Texas's 2nd district.

He went to high school in Colombia and played soccer. He graduated from Tufts University in 2006 before earning a Master of Public Policy degree from Harvard University's Kennedy School of Government in 2018.

He worked as a military legislative assistant for Congressman Pete Sessions. He is an American Navy veteran.

He grew up in Katy, Texas He married Tara Blake Crenshaw in 2013.

He was involved in a Saturday Night Live controversy in which comedian Pete Davidson joked about his and other candidates' appearances. Crenshaw then made a surprise appearance on an episode to follow.

Dan Crenshaw Is A Member Of