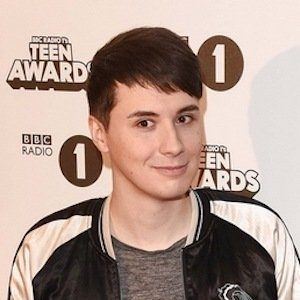 British vlogger and radio personality who has presented a show on BBC Radio 1 along with his co-host and best friend Phil Lester since 2013. His self-titled YouTube channel has earned over 6 million subscribers. In October 2015, he and Lester released the book The Amazing Book Is Not On Fire.

He was a fan of YouTubers such as TomSka, and Phil convinced him to start his channel in October 2009. He briefly attended the University of Manchester with the intent to study law before dropping out to pursue a career in YouTube and radio.

He wrote a weekly blog for The Huffington Post; his last post came at the end of 2012.

He has a younger brother named Adrian. His "Basically I'm Gay" video became a trending video on YouTube upon its release.

He and Phil made their gaming channel DanAndPhilGAMES in May 2014, and it surpassed 1 million subscribers within a year of its creation.

Dan Howell Is A Member Of