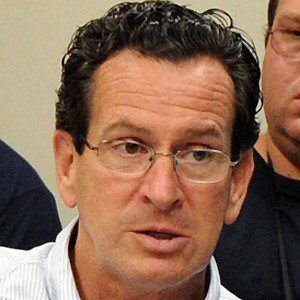 Politician and Democrat who became Connecticut's 88th Governor in 2011. He has notably proposed austere measures to close his state's fiscal debt.

He was the youngest of eight children growing up Stamford, Connecticut.

He was mayor of Stamford, Ct., for almost a decade and a half, the longest term to date.

He met his wife Cathy Malloy while studying at Boston College.

After Hurricane Irene in 2011, he was asked for his opinion on Ron Paul, who said he wanted to get rid of federal emergency aid for states; Malloy answered that he thinks Paul is an idiot.

Dannel Malloy Is A Member Of