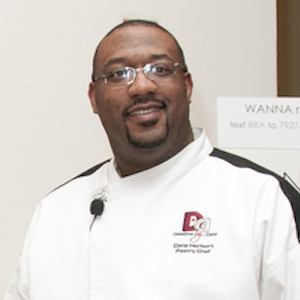 Pastry chef nicknamed "The Sugar Daddy" who was crowned the winner of the first season of the baking competition Next Great Baker in 2011. He has gone on to appear on a number of other cooking reality shows, including Cake Boss, Wedding Cake Wars and Ultimate Cake Off.

He was a member of the Kappa Alpha Psi at the University of Delaware.

He was featured on the cover of Dessert Professional in 2012.

He married a woman named Netesha, with whom he has children named Siani and Jasmine.

For winning Next Great Baker, he got to work with Buddy Valastro at Carlo's Bake Shop in Hoboken, New Jersey.

Dana Herbert Is A Member Of