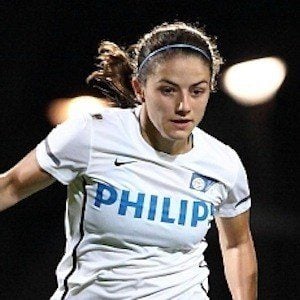 Professional soccer player for the English club team Arsenal Ladies as well as the national team for the Netherlands. She is best known for her position as midfielder on both teams.

She first began playing professionally in the Dutch Eredivisie, as a member of the team Willem II in 2008. She continued to play for the same team for the following four seasons. She then became part of the VVV at Venlo. At VVV, she competed in the KNVB Women's Cup of 2012. She then left Venlo to join the PSV/FC Eindhoven. She eventually joined Arsenal in 2015.

Competing in the KNVB cup of 2014, she eventually earned a runners up medal for scoring 30 goals in her 53 appearances for the club.

She was born and raised in Valkenswaard, The Netherlands. She began dating fellow soccer player Beth Mead.

As a team member on the Netherlands national team, she is on the same team as Vivianne Miedema.

Danielle Van de Donk Is A Member Of