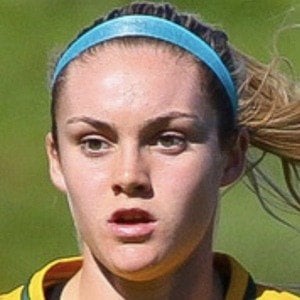 Soccer defender who debuted for the Australian national team in a March 2016 Olympic qualifying game against Vietnam. She played at the club level for the Western Sydney Wanderers from 2015 until 2017; she signed with Portland Thorns FC in 2018 after spending a year with Canberra United.

She regularly played football growing up. She joined the Wanderers in fall 2015 after impressing at the U19 level.

She became the youngest Australian Olympian at the 2016 Rio Olympics as well as the youngest female footballer in history to compete at the Olympics.

She grew up on a farm in Cowra, New South Wales; her parents were both physical education teachers.

She and Alanna Kennedy have played together on the national team.

Ellie Carpenter Is A Member Of