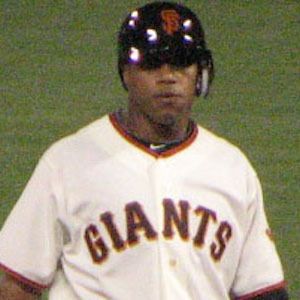 Outfielder whose world-class speed has earned him the nickname "The Bullet." He is best known to Major League Baseball fans for his years as a member of the San Francisco Giants.

He excelled in football and track at Vineland High School, running the 40-yard dash in 4.44 seconds. He later attended Chipola College.

In July 2011, he turned himself into police after falsifying a police report stating that he had been robbed of more than $1,500 at gunpoint.

He was born in Vineland, New Jersey.

He lived with Cy Young Award-winning pitcher Tim Lincecum upon being called up to the Giants.

Darren Ford Is A Member Of