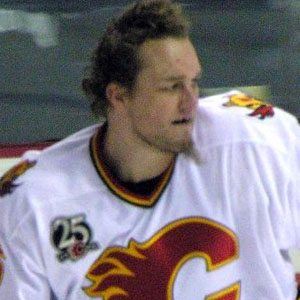 Right wing who was the Detroit Red Wings enforcer during four Stanley Cup Championships in the 1990s and 2000s. He was a fan favorite in Detroit and always did whatever he could to get under the skin of his opposition.

He was picked by the Red Wings in the second round of the 1992 NHL Draft.

After retiring from hockey he became an analyst for the Versus network, and in January 2012, he appeared on a truTV episode of Hardcore Pawn trying to sell alligator hide.

After his father was diagnosed with the incurable multiple myeloma type of cancer, he established the McCarty Cancer Foundation to help raise funds to find a cure.

He recorded his first hat trick in 2002 in a Western Conference Finals game against the Colorado Avalanche's Patrick Roy.

Darren McCarty Is A Member Of