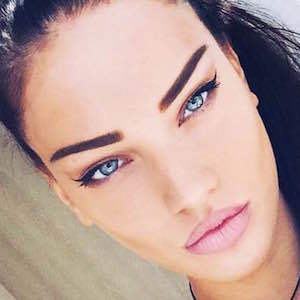 Ukrainian model and social media superstar who has accumulated more than 600,000 followers to her dasha.kina Instagram account by posting selfies and reviews of brands like Protein World and Coco White.

She first joined Instagram and began posting photos to the photo sharing app in December of 2012.

She signed to StarSystem Models and IMG NY. She has appeared in campaigns for designers like Bill Cost and she appeared in a Guess runway show.

A Kiev native, she is multilingual, skilled in Ukrainian, Russian, German, and English. Her mother works for StarSystem Models.

She is often referred to as the Ukrainian Megan Fox.

Dasha Dereviankina Is A Member Of